I've known my friend, Joe, for about 9 months now. He's a good guy, an ex-Marine, living in the Bay Area, who gushes about his kids given half a chance. He also has psycho-kinetic abilities and converses with some high level discarnate beings. You can tell when he gets angry, because you can sense a steely rage, but I've never seen him do anything but walk away from a fight.

He called about 10 days ago, from AZ, where he was visiting his parents (his Mom had injured her foot, and Dad needed some help), frantic to know where his kids were. His wife, Helen, not American by birth, and with many ties still in her home country, had apparently just announced to him that she had left him, taken the kids, and refused to tell him where they were.

It looked to me like they were fine, and still in the Bay Area, but clearly, this was going to be a very ugly divorce: Helen would do anything necessary to get what she wanted, including perjure herself, falsify evidence, steal from him, hide money, etc. I kept hearing to tell him that 'this is the best thing that could have happened to you'.

The next day he found an attorney, and asked about filing kidnapping charges. But it turned out that Helen had gotten a restraining order, which she hadn't mentioned, based on a fight she and he had 8 years ago, which didn't involve the kids. That makes her hiding the kids completely legal. She kept wanting to know when he'd be back at the house. He wondered if she were trying to trap him into violating a restraining order he'd never been served with.

He drove back here from AZ, only to find the rental house that they'd lived in cleaned out of anything valuable, with a mess left. His wife, who'd been paying the rent, as he had been laid off recently, had not paid it. He was about to be evicted, so he needed to quickly get packed, find a new place and move. As he was going through his stuff, he came upon these: 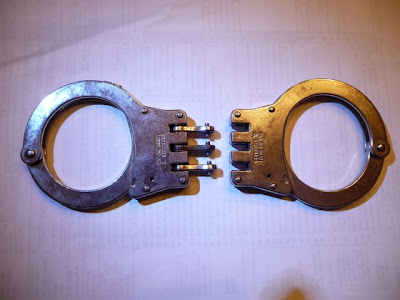 Obviously, these used to be handcuffs. I say 'used to be' because they are now in 2 separate pieces, and they can't be put back together. You can tell from the photo (maybe not on the internet, but blown up, on my computer) that the serial numbers from both halves match. Joe swears that the last time he saw them, when he put them in the bottom of the file drawer he was cleaning out, they were in one piece. These cuffs are made so that those pins sticking out from the left side go into the slots on the right. The barbs on the pins (and the barbs and pins are machined out of one piece of metal) fit into little indentations you can't see inside the slots. The barbed pins must be fitted into the slots of each side, and then the tops welded to the bottoms of each side, so there is no earthly way to get those suckers apart without major tampering. There are no signs of tampering. You can't see any in the photo, and I examined them myself -- not even a scratch.

Clearly, no one on earth did this. Quite a manifestation!

I take the message to be that he is free of her -- or at least will be soon -- and that all her shenanigans will lead to naught, that she won't be able to entrap him.
Posted by Hollis Polk at 10:13 AM

Hollis Polk
You CAN create the life, and the business, you want! Do you want more money, more ease, better relationships? Reap the benefits of what I’ve learned in over 20 years of using my clairvoyance to run businesses, plus my education in engineering from Princeton, my Harvard MBA, my training in hypnotherapy and in neurolinguistics. I put both my analytical skills and my intuitive abilities to work every day to solve a wide range of business problems – and I will teach you to do the same. Call me at 888-4-hollis and I will help you get what you want. For lots more info, go to http:// www.bestpsychicbyphone.com and http://www.888-4-hollis.com

What is your Soul Age?'s Fan Box